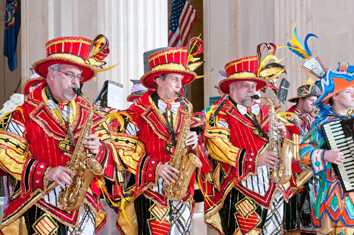 With a student scavenger hunt and a series of newsletter articles, the Philadelphia Section’s year-long centennial celebration paid tribute to the numerous civil engineering landmarks that were central to building the city, things like Philadelphia City Hall, the Reading Terminal train shed, and William Penn’s city plan.

Thus, it was only fitting that another Philadelphia institution – the Mummers – were on hand to kick off the gala anniversary party at the Franklin Institute in May with a fun and festive performance.

The colorfully costumed Mummers are one of the main attractions of the traditional New Year’s Day Parade down Broad Street, and they also perform locally throughout the year.

“We wanted this to be a really great surprise for everyone,” says Jennifer K. Walsh, P.E., PTP, A.M.ASCE, chair of the 100th Anniversary Committee and president of the ASCE Philadelphia Section. “They were a lot of fun. It got everybody out on the dance floor, and…really got the event started.”

“The gala was definitely a great event to showcase the accomplishments of the past 100 years, to honor the civil engineers before us, and make our Section really strong,” Walsh added.

Another highlight of the evening was viewing the nearby PECO Energy Building’s huge electric display, which congratulated the Section on its 100th anniversary. The message ran for 3 days.

The evening also included a presentation by ASCE President Gregory E. DiLoreto, P.E., P.L.S., D.WRE, F.ASCE, a tour of the Franklin Institute, and a DJ and dancing. Area middle school students who won the ASCE Section awards at the local Science Fair were invited to attend with their families. Throughout the evening, a rolling slideshow on a large screen projected photographs of civil engineering landmarks in the area.

“My colleagues and I reminisced about the good old days covering the last forty years or so of the Section’s history,” said one of the evening’s participants, John E. Durrant, P.E., M.ASCE, honorary sponsorship committee co-chair, past president of the Philadelphia Section, and ASCE’s senior managing director of Engineering and Lifelong Learning. “The evening was capped off when we went outside and saw the Section being honored in lights on the marquee atop the Philadelphia Electric [PECO] Building.”

“We began planning our 100th anniversary events as far back as September 2011,” said Jeremy Colello, P.E., ENV PV, M.ASCE, immediate past president of the Philadelphia Section. “The philosophy our anniversary committee took was to take the year to celebrate our Section’s accomplishments as a profession.”

“We really thought the 100th anniversary was a chance to not only celebrate the accomplishments of civil engineers but also to help educate people on what civil engineers do.”

The Philadelphia Section began its anniversary events with a logo contest.

“We did this as way to allow our members to get involved, which they really loved,” explained Walsh.

The winning logo, designed by the Michael Baker Corporation, was announced at the Section’s Spring Social in May 2012 and used throughout the 100th anniversary year on all of the Section’s letterhead, newsletter, and emails.

“Once our anniversary year began last May [2012], we started publishing articles on area civil engineering achievements in our Section newsletter every month leading up to our gala,” says Walsh. “We also decided to create a new Landmark Guide. This is kind of a pocket guide to all the civil engineering landmarks in the Philadelphia area. This year we published a 100th anniversary edition, which would be expanded and given out at the gala and future meetings, [and] which will be a great keepsake for our members.”

Like many other Sections, Walsh says the Philadelphia Section is also planning to develop a centennial book. This book will be a combination of the Landmark Guide along with photos, articles, and remembrances of the 100th anniversary events including the gala.

“Hopefully,” she says, “this book will be developed within the several next months to to provide to our membership.”

Thanks to a well-organized fundraising effort, the Section was able to meet their fundraising goals.

“We were able to ultimately raise on the order of $30,000 through sponsorships,” says Colello, a project engineer at Pennoni Associates Inc. “Past Section presidents John Durrant, Chuck Pennoni, and Joseph R. Syrnick, serving as our three honorary sponsorship co-chairs, really helped us raise the necessary money.”

In April, the Section and its YMF held a 100th Anniversary College Scavenger Hunt. Engineering students from the College of New Jersey, Temple University, and Drexel University were given clues in order to find different historic civil engineering landmarks across Center City Philadelphia. Once the students found the landmark they had to take a group photo of themselves in front of the location and answer questions about landmarks. The Drexel Dragons won the competition and received gift cards.

“It was really great to get that kind of response from our area students,” says Jesse Gormley, E.I.T., A.M.ASCE, outreach coordinator for the Philadelphia Section YMF. “Because what we really want to do is bring in students and get them involved in ASCE.”

Also in April, the Philadelphia Section YMF took part in the 2013 CANstruction Competition. At its conclusion, the YMF presented a check in the amount of $1,011 to Philabundance, an area food bank and hunger-relief organization, from money raised through raffle ticket sales during the 17th Annual YMF Winter Social. The donation will provide more than 2,000 meals for needy people in the Philadelphia area.

Finally, in June, the Section held a 100th Anniversary Celebration Family Picnic at the Camden Riversharks baseball game at Campbell’s Field. The event included upper-level club seating to a baseball game and a 2-hour all-you-can-eat buffet. Following the game there was a fireworks display.

“We thought it would be nice to have a family event,” says Walsh. “I don’t want to speak for the whole committee but I think what we were trying to achieve with all our 100th anniversary events is to create a source of pride – being proud of the accomplishments of the ASCE Philadelphia Section and of everything that civil engineers have done in our area for the past one hundred years.

“I really think all our events, community outreach projects, and the Landmark Guide have succeeded in helping educate people about civil engineering. In the end we all felt a great sense of pride, excitement, and enthusiasm for being a civil engineer and member of the ASCE Philadelphia Section.”

Next month, learn how ASCE’s Texas Section is celebrating its centennial.